“I dreamed that night, the night you talk of,  that you came to me in the shape of a devil, and now I realise that’s exactly what you are. I thought that I’d cursed you; but the truth of it is, you have cursed us: me, my son, your husband.”

British Theatre Guide said of ‘The Withering’ in Edinburgh 2008… In a superb adaptation of Thomas Hardy's short and ghostly tale The Withered Arm, this young cast expertly venture into the author's rural world of inequality and cruel chance. 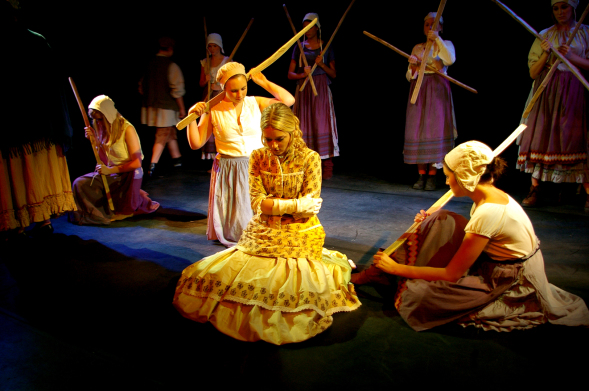 The Withering, freely adapted from Thomas Hardy’s supernatural short story, ‘The Withered Arm’ is a ‘folk song for the stage’.

Rhoda Brook, in her youth, a victim of the landlord’s son sowing his wild oats, now brings up her son alone, working as a milkmaid on the same farm. Thomas Lodge, now the landowner himself, has taken a new, young wife and brings her home to his farm at Holmstoke. But this young woman is not well versed in country ways and all are taken aback by the resulting outpouring of  dark forces that greet her arrival.

The Withering is a play that explores issues of patriarchy, of class and social division, of superstition, of isolation and loneliness, the plight of the outsider and the victim, and of the way in which fate can impose itself on life and the ways in which we explain it for ourselves in the face of ignorance and evil.

If you'd like to see a professionally shot film of the Edinburgh Festival production in 2008 click on the link below. Please note though that the version available on this website is a new rewritten and improved version of this original production.